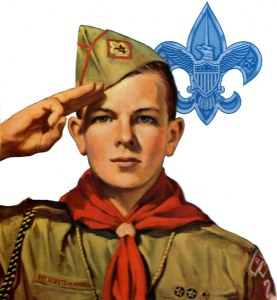 Troop 28 is one of the oldest Boy Scout troops in the country and in the Chicago area. Troop 28 traces its heritage back to 1912 and is the descendant of Troops 22 (Glencoe Union Church), Troop 23 (St. Elisabeth’s Episcopal Church), and Troop 24 (North Shore United Methodist Church).  Troop 28 was formed in January 2009 and Glencoe Boy Scout Troops 23 and 24 merged to offer the Scouts of Glencoe a more comprehensive Scouting program than either Troop alone could provide.

The Glencoe Historical Society collection includes several boxes of scouting materials; they welcome any interested scout or Troop Historian to help inventory the materials to help preserve them for future scouts. They also welcome scouting memorabilia for their collection.

The Historical Society recently celebrated the completion of a comprehensive history of scouting in Glencoe, written by Highland Park scouter and historian John Ropiequet.  They wrote:

If you are a Boy Scout or were a Boy Scout or are simply a fan of scouting, you must read this incredible Glencoe Scouting history impeccably written and researched by long-time Highland Park Scout John Ropiequet.

Scouting in Glencoe began in 1910 at the Glencoe Union Church when the Rev. Dr. Douglas Cornell formed the first troop.  Although not many records survive from the earliest days, Mr. Ropiequet spent literally hundreds of hours reviewing newspaper coverage of Boy Scouting activities in the Glencoe News from 1920 through the end of 1947 to prepare his illustrated history.

The Glencoe Historical Society commends him for his extensive research and efforts to preserve this very valuable history of our community.

Boy Scouting in Glencoe is almost as old as the movement itself.

Because of a recent question that came into the Research Center, the volunteer staff looked into the history of Boy Scouting in the village. The question was sent from the Northeast Illinois Boy Scouts of America Council for this region, seeking to know when the first Boy Scout Troop was established in Glencoe. As the region prepares for an anniversary, staffers there wanted to get their facts straight.

Staffer Peggy Hamil, Glencoe’s former Public Library Executive Director and historical society volunteer, took the question and ran with it, researching through the minutes of the Glencoe Men’s Club in 1912 – did you even know there was such a group? The historical society holds a significant collection of minutes and attendance records from the group, which is, obviously, out of business now. She also went through the records on Boy Scouting, of which GHS has a lot as well: scrapbooks, minutes books and a large number of artifacts including Scout camping equipment and badges.

The following is a summation of what she found in a couple of mornings of looking through archives, artifacts and material, much of it collected when the GHS mounted  a Boy Scouting exhibit “Saluting Glencoe Boy Scouts,” in Fall 2009.

The first Boy Scout troop in Glencoe, Troop 22, was created under the leadership of Rev. Douglas H. Cornell pastor of the Glencoe Union Church. It enrolled 47 boys. (That’s quite a number for a small town.)  Scoutmaster Rev. Cornell’s program was so effective the Glencoe Men’s Club agreed to sponsor the unit and support a local area council, but evidently later withdrew their resolution because the men found their support was not needed. The initial Men Club’s resolution was passed in either early October or late September of 1912 and provided for a “standing committee to co-operate with Scout Master Cornell in lending encouragement to the Boy Scout movement.”

In 1923, the Boy Scout North Shore Council was formed. By 1927, the North Shore Area Council organized to include the local councils of Glencoe, Highland Park and Wilmette.

Following the formation of the North Shore Council, Glencoe’s Scout program increased to include three troops. Since then the number of troops has varied, ranging from two to four.

Since the 1930s, two other troops were added: Boy Scout Troop 23, sponsored by St. Elisabeth’s Episcopal Church, and Troop 24 by the North Shore United Methodist Church.

In the 1960s, the three troops – 22,23 and 24 – were active and Glencoe was home to the local council, in the building that today is single-family home immediately north of the alley behind the Glencoe Historical Society’s home. In its previous life, the building had first held the Glencoe telephone exchange, but when that moved it was sold to the Boy Scouts.

Other information from the files shows:

Scouting has added a great deal to the fabric and history of Glencoe. If want to know more, or have questions, don’t hesitate to call the Glencoe Historical Society research staff on Wednesdays, 10 a.m. to 3 p.m., at 847-835-0040.